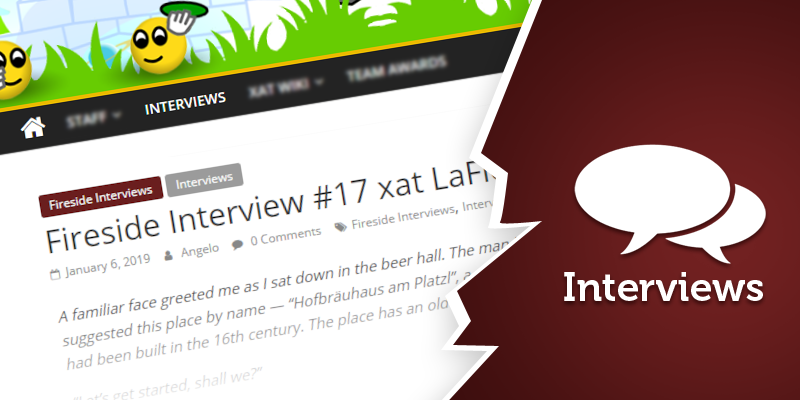 A familiar face greeted me as I sat down in the beer hall. The man I had flown so many miles to visit had suggested this place by name — “Hofbräuhaus am Platzl”, a restuarant in the Bavarian part of Germany that had been built in the 16th century. The place has an old rustic feel to it, but is teeming with people of all ages.

“Let’s get started, shall we?”

Hello to the newest of the xat volunteering team! What’s the story behind the name LaFleur? Would you be open to sharing your actual name?

The name LaFleur is referenced to the televison show LOST, it’s basically the nickname of a character. Out of all the series (50+) I’ve watched, LOST is my absolute favorite.

Some people call me “Flower” which is the translation of lafleur in french, but it’s actually not supposed to be translated :D.

How old are you? Where are you from?

What are you focused on currently in your life? What are your goals for the future?

My goal was to get a job at one of the biggest telecommunication companies in Germany, which I managed to. I’ve started working there as IT specialist as of September. I’m quite excited about it, particularly because of its location, it’s the biggest tower in Munich.

Do you have any other hobbies you really enjoy? (Aside from using xat, of course!)

Playing football, riding bike, going to the gym and nature – I love to be in nature, especially in summer, riding bike in hot summer days with a gentle breeze – lovely.

What do you study/wish to study?

I’ll be stuying information technology while working for the telecommunications company I mentioned earlier.

Let’s talk about xat, how you feel about the website, and where you feel it’s headed.

I first joined, probably around 2008, when i used to visit a couple of anime sites which had the xat chat embedded. That’s how it all started. Later on my interest for xat kept increasing, I started making my own groups, getting into powers – the usual.

How did you first begin to hang out and contribute at official chats?

Back then I rather used to be around German chats and I wasn’t using the name LaFleur. I was visiting help and xat5 occassionally, but I wasn’t really active. It all rather started when i joined the forums (first with the old forums, vbulletin) and later, with the current invision community forum, that’s also when I started using the name “LaFleur”. I always contributed through the forum and then also became very active at xat5.

How did you join the bug coordinators?

I was invited, probably because I used to write down issues that people shared on the forums and I was also the one initiating the Bug Tracker idea, more or less.

How did you get on board for helping with mobile and HTML5?

I was invited. Shout-out to Sloom who suggested me to Admins.

Speaking of HTML5.. any sneak previews you can give us? Any cool new features?

There’s plenty of ideas and concepts that have been shared to Admins. Some of them will surely be used, however, for now, priorities are fixing bugs and implementing the powers/features of the flash chat. One of the essentital ideas we thought of is having settings for anything you can do and have on xat. For instance, if you want to add macros, you would simply do this in the settings and they’d always be saved there, so you can also easily edit, without having to rewrite. If you want to change the Namecolor, you would do this with a Color Picker, if you want to adjust your Sline code, this would done in settings as well – so the goal is to make the chat as user-friendly as possible. There’s also new ideas such as integrating social accounts (similarly to the homepage icon), or having the option to send friend request and much more!

What do you see for the future of HTML? Mobile? xat as a whole?

Making the better chat, with new and free features! As for Mobile, I think it’s a necessary alternative to the desktop chat – to be able to chat with your friends, even if you’re not at home. Though, there’s still work to do on Mobile as well. As for xat as a whole, I think it can get its former popularity back, but probably not until HTML5 is finished. I think it would also be necessary to advertise xat, when the time’s right.

What are your thoughts about the supposed “problem” with powers falling so drastically in price? Any ideas on how this could be fixed?

It appears this started when Ruby was released. Lots of power prices fell down since, however it appears they’re slowing going up again, so time seems to be the cure, eventually.

Do you visit any other chats besides official ones? If so, what are some of your favorites?

What is the German side of xat like? How do you feel about that?

The truth is, there are barely any German users active anymore. It’s unfortunate.

Where do you see yourself in the future of xat?

Anywhere I can help xat with. I’m very dedicated with anything I do.

You’re an owner on xat_test; what changes would you make if you were to be appointed main owner?

Not too much probably. I’d just make sure ranks are given away fairly.

What is your favorite part about xat? Least favorite?

The possibility to meet and talk with people all around the world. Least favorite, most things are outdated or not user friendly. This is something that should be improved with and after HTML5.

What about your favorite power? What’s the most useful power? Least useful?

My favorite power is Neon, it looks extraordinary. The most useful power for me is Goodfriend (unless you’re using the HTML5 chat for desktop notifications :P). The least useful power probably is any power that is outdated, such as Dood.﻿

Anything else you want to say? Anyone to shout out? Any words of wis﻿dom?﻿﻿ 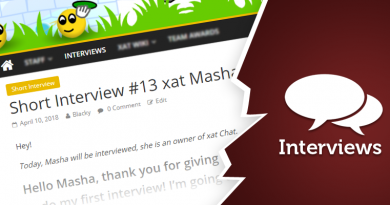 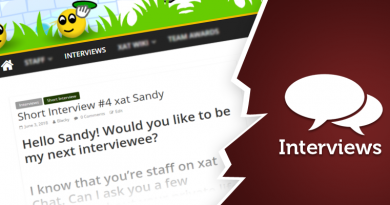 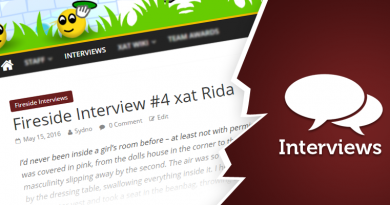