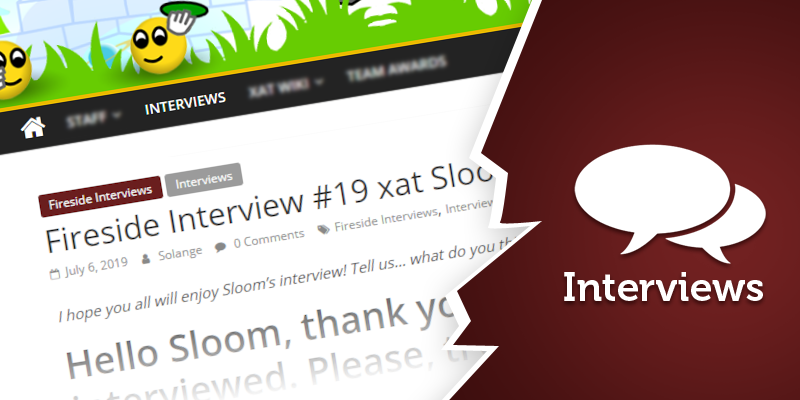 I hope you all will enjoy Sloom’s interview! Tell us… what do you think about this interview?

Hello Sloom, thank you for agreeing to be interviewed. Please, try to be as descriptive as possible when you answer these questions. Let’s start with some private questions.

What is your real name, where are you from, how old are you and what are you studying?

My name is Clément but you can call me “Clem”. I’m from France and I’m 22 (just turned on June 9!). I have studied in computer science and now I’m working as a web developer in a Web Agency since January 2019.

When and how did you discover xat?

It’s been a long story on how I have discovered xat. When I had done my first steps on the internet in 2007, I had created “xooit” forum. Their software had a chat (not xat) already implemented. One day, a random guest came to my forum and then we talked for a while. Then later, he told me, he had a forum also. So I visited it and I noticed that he had a chat not like mine. I asked him about and it was a xat chat. He taught me to use this “xat” chat and so, I embedded one on my forum later (I still remember my first background which was from the Avatar movie) … In 2010, I entered the xat “community”. (Yes so late because between 2007 and 2010, I was part of the “Call Of Duty” community and we all had a xat chat).

I was really surprised. I would not believed that developers could do such a thing like that with a bunch of features. And then in 2010, I discovered the xat community which makes me more surprised because it was more than I expected. As a future and young developer (yes I was a young boy at this time), it was a platform to learn more about.

Well, I hate to be such a negative person with xat, but my global impression is, we are slowly dying and it’s a thing I don’t like to see. I used to see every chats full and now it’s almost dead… xat has the capacity to gain users again but it needs time and work as they are developing the HTML5 chat and mobile application. Also to users that are saying admins are doing nothing to gain users, they have a lot of plans for. I’m hoping to see xat more alive in the next years.

What do you think about the current xat community?

I’m going to be honest on this question and whatever people think about this, it’s my personal opinion but it’s more about the English community than other ones. I really dislike this community. You are going to ask me why ? And I’ll answer you that: xat was made to make friends, but unfortunately some users are not there for that but to “criticize” people or even xat. I don’t even see why we call it a community if 80% of the users are haters and here to destroy the community itself. We can’t even enjoy or talk without being criticized. This is how new users leave xat because they feel uncomfortable for that reason. I mean if they don’t like xat, why can’t they just leave?

What do you think of the xat wiki?

Bad because the informations on the wiki are hard to find. Until today, I still have to type on Google to find the correct xat wiki for something I’m trying to find on the wiki itself (except for powers obviously). I think it should be revamped with a new system which would display all links by category so you can find easily what you need.

What do you think about “trust”? Who do you trust a lot on xat?

Trust is a huge word. Giving trust to an online person is really really hard. I used to give my trust to a lot of people on xat, and it always ended badly. Now I’m trying to stay safe. At the moment, I’m not trusting much of people; probably 3 – 4 people on xat.

I think it was in 2014 because of Blackfriday. So much profits.

Have you ever met someone from xat in real life?

How long do you think you will stay on xat?

It’s a good question. I don’t have any date on when I’ll leave. Sorry haters…

Who is your role model on xat?

Where do you see the future of xat?

I see it in a positive direction, where we can gain a lot of users with our HTML5 chat/Mobile application and be like those first years to be so popular. There are a lot of work, but as a tester, I know and I’m sure that we are here to make everything great again with the admins! Well, we will try!

Let’s drop it to funnier things and let me ask you the things you like or liked on xat.

What is your favourite power or smiley?

I don’t have favourite chat but I can say xat_Test since it’s the only chat I am at.

My best memory was when admins asked me to work with them for HTML5/Mobile in June 2017 until now. After this time, we built a good testers team all together.

What are your opinions on the Contributors group?

Nothing much about. I think some users from this group do not take their “role” seriously. Well, most users do not take xat seriously so I’d not be surprised if some of the group are the same… But! I learned a lot of things by being in this group. “Be free to speak your mind when you can.”

You have the title of Game Maker on the forum. We would like to know more about it.

My Game Maker title … It all started in October 2018 when admins were working on the ‘appbot’ feature. I was invited to help developing (not coding, just giving ideas and testing) the feature and then later when the feature was stable enough, on my own, I decided to create the game (with admins help) called “SmileyMatch”. A few days later, I was given the “Game Maker” title by Andre. Now, the title is pretty dead because appbot is not longer worked since a few months.

You have been part of xat_Test for a long time. We would like to know more about your career on xat_Test. When and how did you first become a moderator?

Olala. I don’t remember exactly, but I can tell you that my first tempmod was in 2014.

You have been working with Admins closely for the development of the HTML5 version of xat. We would like to know more about your experience about it.

It’s really good to work with admins. You learn a lot of things, a new way to create/test things but it’s a lot of patience. Since the day I’m working with them, I feel a rise in competence because it’s a real challenge to work with them.

You are also a tester alongside with LaFleur, Maverick and Cupim. Could we know more about your experience as a tester for xat?

As I was saying in my previous answer, it’s a lot of patience. If you guys know how admins are, you know that if they fix one thing, another thing will be broken. So… we have to make sure to test every features implemented and check if there is no bugs. It’s been like that since June 2017 but it’s fun. We are never bored.

Being a tester is also a good thing because we can listen to users suggestions for HTML5/Mobile and suggest them directly to admins. We have always 90% of chance to get them added.

You are the owner of https://illuxat.com/, which was added to the external resources wiki page recently. How and when did you start this project?

Before Illuxat, I had a site calle “r3voluti0n”. I used to make some random tools/generators which weren’t related to xat just to train myself in “coding”. And later, when I saw all the xat resources, I was like “why wouldn’t I create my own xat tools website? Maybe it can work…”. I have thought for so many months before doing it but the inspiration to do it came into me. In June 2014, I bought the domain “illuxat.com” and all started from this date(Yes, it’s 5 years old now!).

Be positive and stay happy! 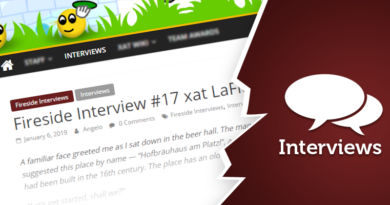 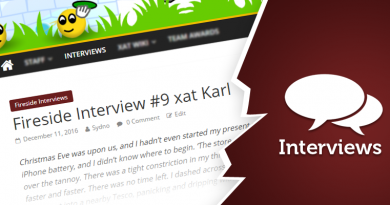 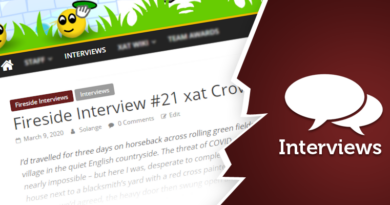